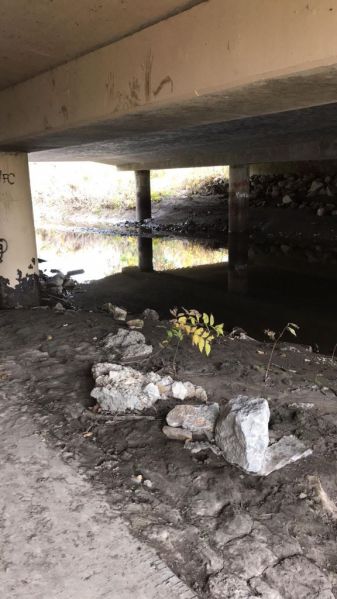 The Trials of Teresa Troll

When I first met Teresa Troll she was wasting away under her bridge. People had been leaving town in droves since they built the bypass. Barely a soul had trip-trapped across her bridge in months. I must confess I was a little concerned for my safety. However, despite her hunger, Teresa insisted she’d never stoop to eating a vegan. Apparently, we taste of chickpeas.

Eventually Teresa packed her belongings and went to find a new bridge. I can’t say where she ended up, but if there’s a bridge near you, I’d suggest you check underneath before you go trip-trapping across…

Authors note: I am not actually a vegan, and I doubt very much that I taste of chickpeas. 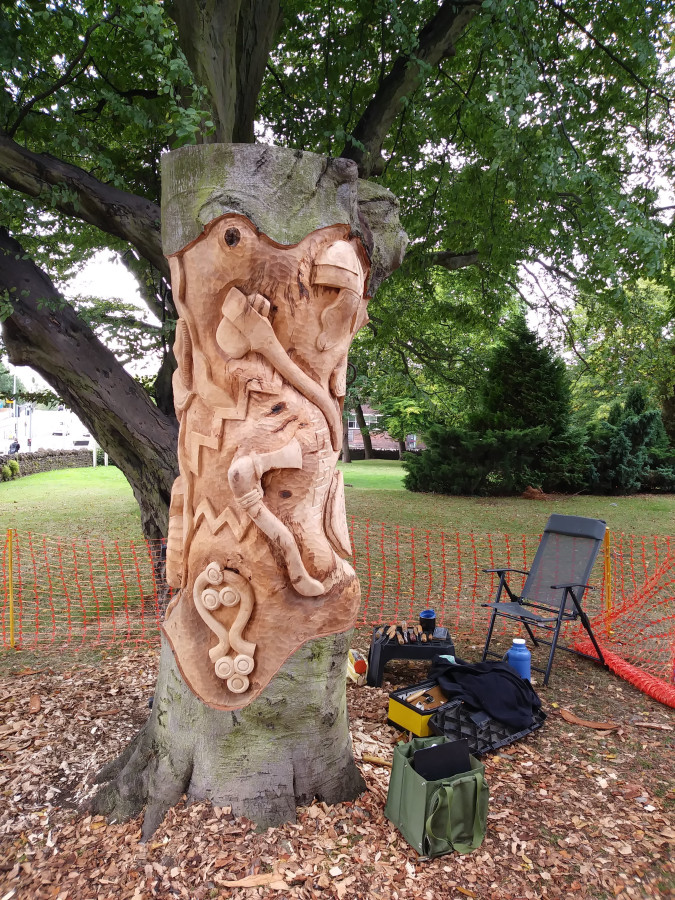 Geraldine threw down her cap in horror. She’d returned from the pub after a quick pint to find the words JACK WOZ ERE carved into her favourite tree. People thought Tree Protection Officers watched trees all day … okay, she basically did. Now she’d failed at even that simple task.

I’m going to get fired, thought Geraldine. Maybe if I carve a little here, shave a bit there…

Hours later she stepped back, admiring her work. Not bad.

Even better, her hat had filled with coins while she worked. Enough for a pint, Geraldine grinned and headed back to the pub.

Apologies to any Tree Protection Officers out there, I realise there’s more to the job than watching trees! I’ve been on holiday for a couple of weeks (did you miss me?). The wifi was bad and the company good so I didn’t try to participate while I was away but am looking forward to getting stuck into this week’s stories.

A Little Present from Sprongolia

Sandra pointed at an exhibit entitled ‘Under the Sea’ and giggled.

‘It always amuses me to see this on display,’ she said, in Sprongolian. ‘What do they call it again?’

Rochelle squeezed her three tongues together to formulate the word in English.

I’m off on holiday this weekend for a couple of weeks so please don’t think I’m ignoring you if I don’t reply immediately. If the WiFi’s good (and the company’s bad) I may take a peek while I’m away 🙂 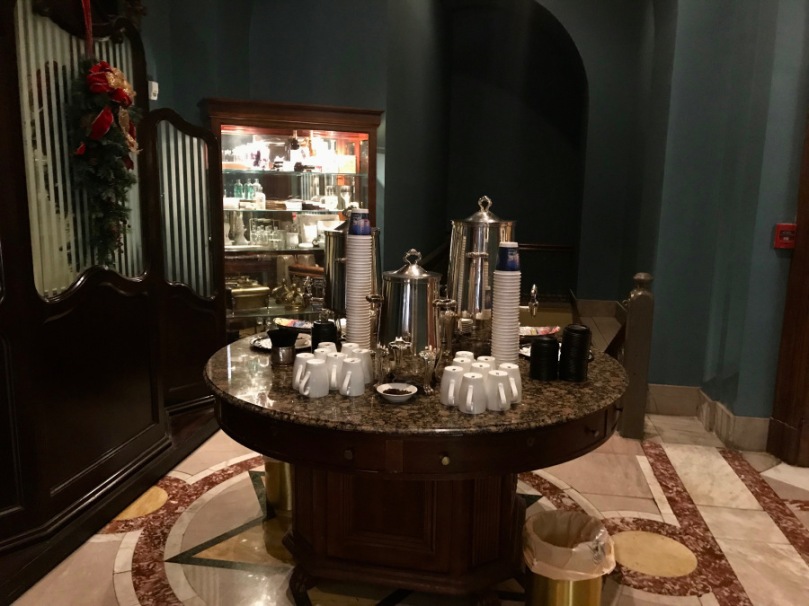 George sighed as he surveyed the empty foyer and wondered why his Chernobyl-themed hotel was such a massive flop. He’d spent years planning every detail from the radiation-themed wallpaper to the complementary hazmat suits. He couldn’t understand it.

‘Maybe,’ said his long-suffering wife, glowing quietly. ‘If you hadn’t built it here. In Chernobyl. Slap-bang in the middle of the exclusion zone. Where people aren’t actually allowed to go?’

‘Nah,’ he said. ‘Give it time.’ And he picked up a glass and gave it a quick polish while the Geiger counter in the corner ticked away feverishly.

The prompt made me think of empty hotels and reasons why they’d be empty. However, it turns out that a hotel in the exclusion zone of Chernobyl is not such a crazy idea. Someone beat George to it: Pripyat Hotel, Chernobyl

Greta knelt in the flowerbed admiring the exquisite white daisies, they were truly spectacular this year. She was famed for her green fingers, friends joked that she could plant anything and make it grow: shoes, umbrellas, even money (she tried – no joy).

Greta was rarely allowed to buy seeds; her husband kept a tight hold on the purse strings, and on his wife’s strings. He enjoyed making her dance. Until she snapped and he found himself on the receiving end of her hefty garden spade.

I’m a day late this week. Busy, busy, busy! The picture made me think of an umbrella tree, and my story sprouted from there 🙂

We lived in Gothic House, seven squeezed in students. My room was the smallest, a cupboard really, barely space for the slatted single bed, but only a tenner a week. I kept my suitcase under the bed, wide open. When I needed anything, I’d sit at one end and roll up the mattress to get to my things. For a really good rummage, I’d drag the whole suitcase into the hall.

Now I wander through my country house, with its marble floors, balconies and double bedrooms, and I wish I could peel the mattress back to those Gothic House days.

Another Friday, another fiction. This one’s less ha ha and more wistful aah. Click the link below to see what other Friday Fictioneers did with the prompt, or click here to head over to Rochelle’s place and join in.

This story won first place in Zeroflash’s monthly flash fiction competition. The theme was 8-bit universes and it got my creative juices flowing. Why not pop over there and have a go at this month’s offering? After you’ve read all about Square Peg of course!

Mrs Peach sat in the doctor’s surgery and squeezed her daughter Peggy’s hand, trying to ignore the stares they were getting. Please don’t let anyone drop the P-bomb, she thought to herself, fingers crossed. A small boy pushed open the door, pulling his mother behind him. Spotting Peggy, he stopped abruptly. Hand outstretched, finger pointing, he uttered the word that Mrs Peach had been dreading.

“Mum, that girl’s all pixelated!”

“We don’t use that word, Robert, we say ‘underdefined’,” said the boy’s mum, ushering him away. She turned to Mrs Peach, “Sorry, he doesn’t know any better.”

Yesterday was Peggy’s tenth birthday. The whole class was invited, although only a handful came, a pitfall of being the only underdefined child at a high res school. Mrs Peach had laid on all of Peggy’s favourites: Battenberg cake, Turkish delight, Kola Kubes and cartons of juice. Then Grandma ruined the day, calling Peggy “too jagged for cuddles”. Grandma’s was a different generation, but that was no excuse. Peggy ran outside. Mrs Peach found her hiding in the garage trying to rub off her edges with sandpaper.

Still, things were looking up. Dr Trenneman had had some success with cases like Peggy’s. When the doctor appeared Mrs Peach squeezed her daughter’s angular hand once more and allowed her to be led away.

“Oh, it was simple really,” said the doctor, smiling. “I just switched her off, waited five minutes and then switched her back on again.”

Bit On The Side

Mildred twitches the curtain. She drops her jaw and picks up the phone.

‘Guess what, Norma,’ she says, transfixed. ‘Daphne over the road’s asked the milkman in!  This time last week, she was carrying on with the postman. Remember? Shameless hussy! Not that he’s any better. If my Conrad fooled around like that I’d string him up by the knackers.’

Three houses down, a door opens. A woman buttons her blouse. A man kisses her neck.

‘Tell Daphne she can take off the milkman’s costume,’ he says with a wink. ‘Show’s over.’

I thought I’d join in with Friday Fiction (it’s been a while!) – click the link below to see what other writers did with the prompt, or click here to head over to Rochelle’s place and join in.

Bob Tambourine and his kaftan-clad wife, Windsock, loved their crooked little stone house. Bob had built it himself (you could tell). Their daughter, Cinnamon Sky, was less enamoured. She craved normal things like matching plates, burgers made with meat not lentils, running water, electricity, clothes with the price tags on and food that comes in cellophane packets.

But most of all, thought Cinnamon Sky, as she squatted in the dark outside, most of all I want a toilet. Indoors. With a seat. And a flush. Cinnamon smiled at the thought, and then sighed as she accidentally peed on her toes.

Written for Friday Fiction – click the link below to see what other writers did with the prompt, or click here to head over to Rochelle’s place and join in.

Need more Tambourines? Try Cinnamon Sky Sees The Light or It’s Pretty But Is It Art?

“Don’t do it!” the old woman yelled into the waves. “Don’t do it, you foolish girl! He might be your Prince Charming now, but he’ll be Prince-having-it-off-with-Tina-from-the-chip-shop before you know it. They’re all lying bastards! I should know, I was you fifty years ago. Don’t make the same mistake!

And nobody warns you about leg cramps, or arthritis, or how insanely ugly knees are. And don’t get me started on varicose veins!”

There was a distant splash and the briefest flicker of a shimmering fishtail, then the sea fell silent. The old woman turned away, relieved.

…although I cheated with the word “Prince-having-it-off-with-Tina-from-the-chip-shop.” Check out other (probably more sensible) writers by clicking on the link below.